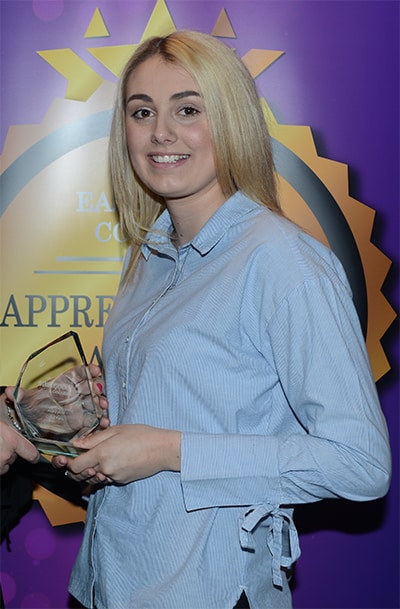 Chloe was nominated by her apprenticeship assessor for the East Coast College Apprenticeship Awards in 2018. Her assessor said: “Chloe joined LiMAR in August 2015, the summer she left school, she always completes work set to a high standard. Chloe completed her Level 2 Business Admin course and then was eager to progress onto the Level 3 programme; prior to finalising the Level 2 course she was already researching the possibility of a Level 3. She is an example to any young apprentice and always strives to do her best.”

Chloe has learnt so many valuable skills and gain so much knowledge by studying an apprenticeship, she said: “My advice to anyone who is considering apprenticeships would be if you have the opportunity definitely take it up. It’s a great way to gain appropriate skills for work and earn money at the same time. You will have the opportunity to learn new things, communicate with others and have a paid job whilst you are studying. Always work hard, and take it seriously. An apprenticeship is a great way of starting off your future career. Always ask for help if you need it. The support is always welcoming and helps you push hard to succeed what future goals you have.”

“My advice to anyone who is considering apprenticeships would be if you have the opportunity definitely take it up. It’s a great way to gain appropriate skills for work and earn money at the same time. You will have the opportunity to learn new things, communicate with others and have a paid job whilst you are studying” 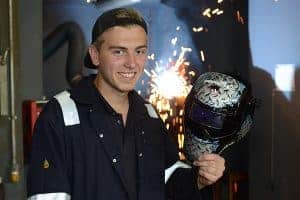 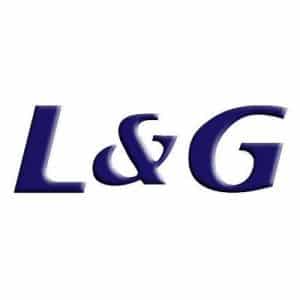 Josh was an apprentice welder at L & G Engineering in Norwich, spending a day a week in the welding workshop at East Coast College for his level 2 qualification. Josh has continued to go from strength to strength, not only emerging as an expert welder, but becoming recognised in a series of competitions and awards.

Josh aimed to be named the best welder in the world at the WorldSkills Finals in Abu Dhabi.

The 21-year-old trained round the clock since he struck gold at the Euro Skills Finals in Gothenburg last December. Josh underwent an intensive final four-day selection process in Manchester.

He said: “I’m very, very pleased. I had a very good week of competitions. The last training session before team selection didn’t go well but when it came to competition time, I just tried my hardest.”

He joined the nation’s young skilled men and women as they competed in the global competition.

Josh won a medallion of excellence for welding as Team UK celebrated a haul of 20 medals made up of one gold, three silver, three bronze and thirteen medallions of excellence.

WorldSkills UK uses competition in the workplace, schools and colleges to inspire the next generation and fill the skills gap.

WorldSkills Finals are held every two years when over a thousand competitors from more than seventy countries gather for four days of competition.

Yolanda was an apprentice administrator at P & S Personnel Services in Great Yarmouth, studying for her level 3 qualification with East Coast College. Yolanda continued to go from strength to strength, and is highly valued within her work place.

Before starting her apprenticeship, Yolanda was unsure what to do, now she is on the path to a very successful career in business administration.

Yolanda implemented new procedures, set up systems, organised six members of staff and had been the ultimate eyes and ears of the business. Yolanda oversees the payroll, marketing, budgets and social media for the company as well as her day to day administration duties.

Her colleague said “she is a strong asset to the business being reactive to all tasks and presents the highest level of service delivery to the clients. Her cheerful and positive attitude helps everyone in the office exceed their business goals and she is highly valued for being there just when you need her help!”

In 2015 Yolanda was nominated for the overall apprentice of the year award at our annual awards ceremony. She didn’t walk away with the star prize that year but when she was nominated again in 2016 she scooped it!

Yolanda is just one example of how an apprentice can become a fundamental part of a team.